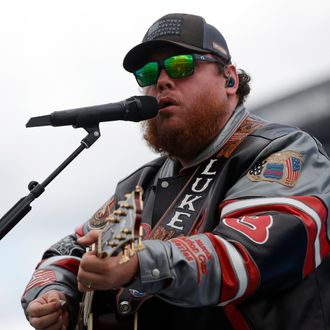 Yet another country singer is facing the music regarding their past racist actions. On Wednesday, country-music star Luke Combs issued an apology for his use of the Confederate flag and imagery in the music video for Ryan Upchurch’s “Can I Get a Outlaw” in 2015. Images from the video have begun circulating online, depicting Combs performing in front of a Confederate flag accompanying himself on an acoustic guitar that had a sticker with the flag’s image on it, but now the “Cold As You” singer says that “there is no excuse” for utilizing such imagery. “As I’ve grown in my time as an artist, and as the world has changed drastically in the last five to seven years, I am now aware how painful that image can be,” Combs said, in conversation with Maren Morris and moderator Ann Powers on “accountability and the future of country music” for the annual Country Radio Seminar. “I would never want to be associated with something that brings so much hurt to someone else.”

The conversation among Combs, Morris, and Powers came in response to video footage of rising country-music star Morgan Wallen using the N-word. The video sent shock waves through the country-music community, prompting musicians like Morris to speak out about racism in the industry. Morris, who dedicated her 2020 CMA Award for Female Artist of the Year to the oft-undersung contributions of Black women to country music, was one of the few stars in the field to directly condemn Wallen’s actions, tweeting, “We all know it wasn’t his first time using that word.” Combs said that he chose to participate in the conversation in an attempt “to learn” and “to get better.” “I know that I’m a very highly visible member of the country-music community right now,” Combs said. “And I want to use that position for good, and to say that people can change and people do want to change, and I’m one of those people trying.”

Any @lukecombs fans out there? Anybody care that he has multiple pics with confederate flags on his guitar and in his press photos? Why is this not a topic of discussion? We all knew he couldn’t write a song and Walmart was his fashion designer but guess what? He’s racist too. pic.twitter.com/vvolPR2CDw