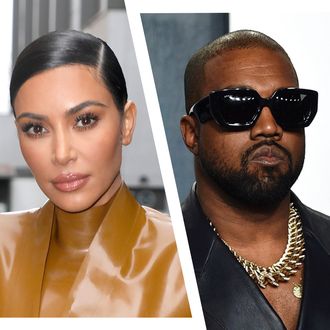 Kim Kardashian and Kanye West’s marriage is going through some shifts, according to two recent reports. A source told E! Online the couple “are doing their own thing,” adding, “They spend a lot of time apart.” Now, given that E! airs Keeping Up With the Kardashians (for one final season, that is), there’s a nonzero chance said source is one Kris Jenner, but alas. Kardashian and West are “focused on the things that are important to them,” according to the source, including raising their four children along with their own “me time.” “She lets him go off and be who he is,” the source said of Kardashian’s current dynamic with West. “It is what it is.” E!’s report, published December 15, follows earlier reporting from People on December 11. A source told the magazine, “Kim has work and projects that are important to her, and Kanye has his. Their lives don’t overlap much.” The source went on to say Kardashian and West “very much live separate lives.”

The news comes after West was conspicuously absent from Kardashian’s island-getaway 40th birthday party. The party coincided with the final stretch of West’s controversial failed presidential run, but he did send his wife a hologram of her late father, Robert Kardashian. It wasn’t the first time West’s presidential bid got in the way of his relationship with Kardashian either. In July, West tweeted a slew of personal details about his relationship with Kardashian and their family, after claiming at a rally that he and Kardashian had once considered an abortion. Kardashian made a rare public statement on her husband’s mental health at the time, asking for “compassion and empathy.” Shortly after, a source told People Kardashian wanted to “save her marriage” and was “not happy about” his presidential run. By late August, People reported West had been spending more time with Kardashian and their children, but a source later told “Page Six” a divorce could still be on the table after West once again spoke about his views on abortion with Nick Cannon.

The latest news on the state of Kimye comes as the Kardashians prepare for the final season of their namesake reality show, set to bow on E! in 2021. At Disney’s jam-packed investor day on December 10, the company announced that the Kardashians had signed a multiyear agreement to produce “new global content” with Hulu. Meanwhile, Khloé Kardashian also revealed on Twitter that the family wouldn’t be holding their iconic annual Christmas party due to COVID-19. But, according to E!’s source, that doesn’t make Christmas a no-go for the Kardashian Wests. “They will be spending Christmas Eve with the family having a low-key get-together,” the source said of the couple. “It won’t be like years past, but they will do something as a family and all be together.”